Standby Task ForcePosted on December 19, 2011 Posted in ALL POSTS, Other posts — 1 Comment ↓

[Guest blog post by Andrej Verity. Andrej is an Information Management Officer at UN-OCHA in Geneva with a focus on both leading OCHA’s collaboration with the Volunteer & Technical Communities and supporting OCHA’s information management staff around the world. In 2010, Andrej deployed to both the Haiti earthquake and the Pakistan floods. In March 2011, Andrej lead OCHA’s collaboration with the Standby Task Force in creating the Libya Crisis Map. Later that month, he also worked closely with Crisis Commons in their data collection exercise in response to the Japan tsunami.]

At the beginning of March 2011, OCHA HQ activated the Standby Volunteer Task Force (SBTF), a self-organized group of structured volunteers, to create the Libya Crisis Map (LCM) early in March of this year to help provide better situational awareness of the unfolding situation on-the-ground. This site and the data were made available to responding organizations with the intention to them improve their operational planning. The site was extended beyond the first month largely based on efforts from OCHA Colombia, volunteers sourced from the UNV online volunteer service, and SBTF members who choose to stay on beyond the official SBTF deployment.

But Why the Collaboration?

It comes down to two simple reasons: 1) the UN did not have physical access to the country, and 2) OCHA did not have the idle capacity to gather, verify and process the enormous amount of available online information. In many ways the resulting data behind the map was the “gold mine”. OCHA had a data specialist reviewing the data, looking for patterns or trends in the data, showing what ‘non-map’ products could be generated, and outlining how such data could be integrated into traditional coordination products.

But what measured impact did the map have?

At the moment, a Masters student from Tilburg University is working on a formal impact evaluation of the site. However, measuring the impact of even a traditional static map is not an easy undertaking. What was the measured impact of the last map you used?

The LCM data was being incorporated into the traditional Who-is-doing-What-Where products and info-graphics which were being created remotely by OCHA IMOs [Colombia, DRC, Ethiopia, Kenya, Pakistan, South Africa, and South Sudan]. These products were then being printed and shared inside the emergency arena. So, what impact did those printed products have? We rarely try to measure their impact on decision makers but recognize they are necessary in every emergency. So, if the LCM data augmented these products, what measurable impact can we say it had?

The challenge in quantifying the impact of information products in situations such as the Libya crisis is they tend to be incomparable to other situations and may yield very skewed outcomes. For OCHA, the impact the volunteers had on the efficiency of the operations and quality of decisions being made is perhaps more interesting. This impact can be more easily quantified by assessing the effectiveness of the decision makers using the maps as input and compared to their workload in other crisis before the SBTF was put into action. This quantifying research is currently being conducted, but on our preliminary qualitative input we can already see that the SBTF has a significant impact on OCHA’s way of working.

The unexpected impact? How we now work differently.

There are three core areas in this collaboration that have influenced OCHA’s work:

1) Speed: as noted in my blog post on UN Dispatch at the end of March, I outlined how much faster we could produce standard IM products in the early phases of an emergency when working with remote volunteers and/or staff. It was quite stark and significant.

2) Connection / Communication: The information management team in OCHA HQ was quite impressed with how well the always-open, tiered Skype chats worked in collaborating with the self-organized task-team based volunteers. The team has taken this approach and opened our own group for OCHA Information Management Officers [which has really made our internal IM Community of Practice flourish and provide support to each other]. We have leveraged the same approach to help incorporate field-based staff into the development of standard tools and software – something we were rather poor at in the past. As well, when we had one IMO responding to floods in Cambodia, we asked for OCHA IM volunteers and placed them in a dedicated Skype group. We ended up with IMOs from Sri Lanka, Pakistan, Cote D’Ivoire, Liberia and Haiti helping out with the efforts.  The OCHA IM team is really learning how we can leverage remote support and are incorporating these concepts into traditional mechanisms.

3) Collaboration Platforms: to collaborate with the external volunteers, we had no choice but to accept the use of non-UN standard software [e.g. Skype and Google Docs]. However, the abilities that these modern tools unlocked helped some of our traditionally skeptical staff members realize there are better ways of working.  It has started a culture change [even if slow].

So, you can easily deduce that OCHA is adopting concepts from the SBTF work style. How much of an impact is that?  Perhaps not quantitatively measurable, but could be qualitatively described a “big”.

But, what challenges arose from the use of new technology and the volunteers?

The challenges can be summarized into three categories:

1. Zoom Level. The volunteers tend to want to work at the highest possible zoom [i.e. close to the affected] and we can understand that desire. However, large responding agencies are dealing with multi-million dollar programme spanning across millions of people in countless locations.  Although they are concerned for the individuals, they need information at a different ‘zoom level’ in order to assess, plan and respond. Thus, we need to ensure that there is a way to aggregate the detailed data appropriately for people or organizations working at different zoom levels.

2. Always On. One major benefit of the volunteers, enabled by modern technology, is that they are dispersed around the world resulting in almost 24 hour support. However, the flip-side of that benefit is that the liaison person from the requesting entity can be faced with questions/issues around the clock if structures, messaging and requirements are not defined early. With the task-team structure used by the volunteers in place, we know that OCHA was sheltered from a large number of questions. Still, in the early days, there were a significant number of topics that arose which needed to be addressed. It meant that we had to be connected all the times – from checking Skype over breakfast, to responding to emails while on the bus, to skipping dinner in the evening to review a risk management strategy.

3. Questions. The volunteers are not necessarily experts – and do not pretend to be when they are not. The challenge for the requesting entity is that someone needs to be available to answer hard questions in a very timely manner. In the Libya context, defining appropriate report categories was one of the first and most challenging questions for OCHA to answer and has reconfirmed that standards are needed.

Did ethical questions arise for the UN?

Of course ethical questions arose during the LCM deployment. They were not specific to the UN. In the Libya context, we dealt with three specific issues:

1. Identify. We did not want any information provided in the LCM that could be used to identify the individual who reported.

2. Location. To avoid anyone from being able to pinpoint anyone reporting, the data was generally anonymized to the centroid of the city it was reported from.

3. Do No Harm. Given the situation in Libya was conflict-based, we needed to ensure that whatever we did minimized the chance of causing anyone harm.

Early in the deployment, OCHA made a decision to run two separate websites. The private site would hold all original data and only be accessible to approved agencies. The public site would show no identifiable information and the data would be delayed by 24 hours. Some have argued that two sites were not necessary [e.g. everything private or only have the anonymized public site], but all we can say is that “It worked”.

What is OCHA doing now?

In June, OCHA held a lessons learned workshop with several of the V&TC entities with whom we collaborated with either for Libya or Japan. That workshop pointed towards 9 thematic Communities of Interest (COIs) to be developed to ensure future collaboration can be maximized [see the final report]. OCHA has been pushing these forward in an attempt to get them started and hosted a one-day meeting with the COI leaders prior to ICCM 2011. [Note: originally a Humanitarian Standby Task Force was suggested, but it has morphed to a ‘network-of-networks’ concept – which will likely be called the Digital Humanitarians – and be designed to receive requests for virtual support and then find the appropriate entities to support those requests]. In the Libya and Japan crisis, OCHA received support from several V&TCs which resulted in some (positive) unexpected impact and we want to continue to explore and understand the possibilities through the COIs mechanism to help maximize the benefit and effectiveness of V&TC engagements with the traditional humanitarian entities.

This collaboration, amongst others recently, has helped to show OCHA’s IM team that we need to open up our work, our data, and our ideas to external parties very much in accordance with the principles Dan Tapscott outlined in Macrowikinomics: Collaboration, Openness, Sharing, Integrity and Interdependence. We are no longer in an era where good ideas only come from inside our own organization, but rather in a time where we have to be open and ready to receive them from outside. 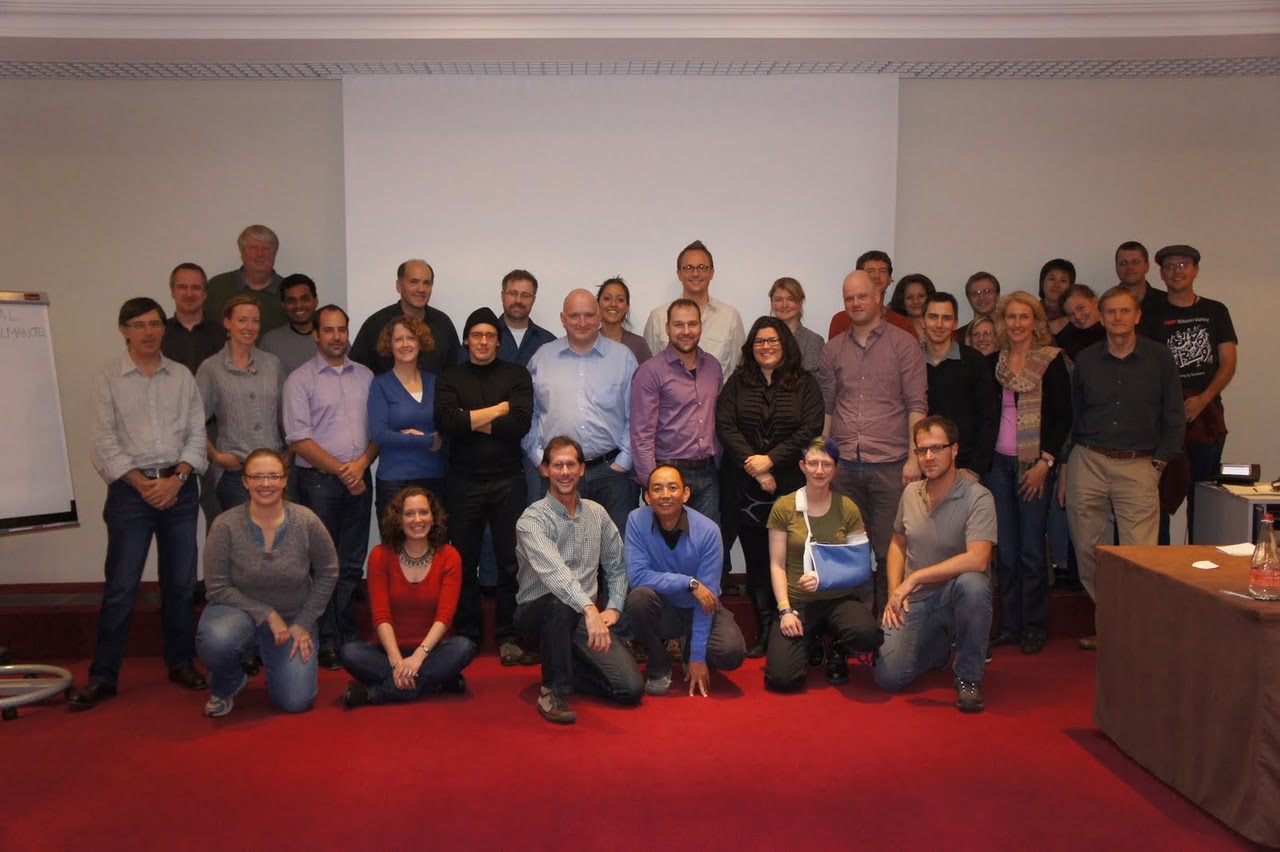